Reflexology is a natural therapy that stimulates the psychophysical wellbeing of a person with acupressure.

When was reflexology invented?

It appears that some sort of reflexology was already existing in Ancient Egypt, in fact in Akhamahor’s tomb, also referred to as the doctor’s tomb of 2330 B.C., there was a mural depicting a doctor stimulating the hands and the feet of his patients.

There are though two different currents of reflexology, the Oriental one and the Western one. The first is based on Traditional Chinese Medicine, and the first treatments appear to be dated as far back as 5000 B.C. in India and China.

In Western countries, foot reflexology has flourished thanks to William Fitzgerald(1872-1942), an American nose and throat specialist  looking for a natural way of anaesthetizing his patients before minor interventions.

He divided the body in ten imaginary zones, the so called “Fitzgerald’s zones”, starting from the head and going down to the upper and lower limbs: 10 lines, corresponding to the 10 fingers of hands and feet. According to his Zonal Therapy, by treating with acupressure a point on the finger the corresponding organ is stimulated. These lines are considered to be connected to one another through a flow of energy and can therefore influence one another.

After Fitzgerald, a fundamental figure for the development of what is nowadays known as foot reflexology, was Eunice Ingham (1888-1974) an American masseuse who starting from Fitzgerald studies managed to collocate the whole body on the feet.

Her two books “Stories the Feet can Tell” and “Stories the Feet Have Told” were very important for the broadcast of her discovery. She developed the basis for the maps of foot reflexology that contributed to the spreading of this practice.

Reflexology therefore is based on the knowledge of the nervous system, as the acupressure points are connected to specific organs through nerve pathways.

Reflexology is an holistic therapy, based on the belief that every aspect of the life of someone influences both the wellbeing and the health of a person, and therefore operates for a “re-balancing of the whole organism in order to stimulate its self-healing abilities” 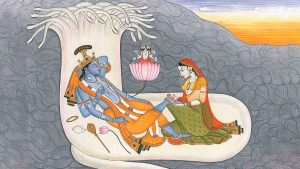 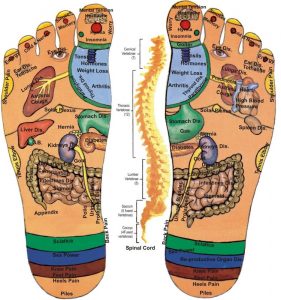 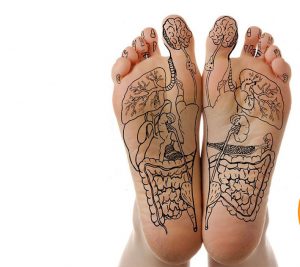